Many people encounter times of crisis or trauma during their lifetime. Some even encounter several or many. The media show many of these traumas and crises, the sensational reports seems to satisfy people in their relatively boring day to day lives. Much changes during trauma or crisis.  The people concerned suffer considerable damages, losses, injuries, lose their belongings and loved ones. The strange thing with all these occurrences is: nobody wants to take blame for them. Nobody saw the disaster coming. Nobody knows anyone who would take responsibility. If anyone can be found guilty in hindsight, they will be seen to have acted maliciously and with intent and should be prosecuted. Politicians and celebrities suddenly become a bunch of goody-two-shoes promising billions which often cannot be claimed by the people concerned as they sadly are not eligible in this particular case.  After a few days, when the worst is over, daily life takes over again for politics and media: new sensational reports, new matters of importance, new crises and traumas are in the making and must be prevented using expensive weapons, espionage, journalism and prevention programmes. When the next crisis, the next trauma appears, it becomes apparent that the weapons fire in the wrong direction, the warning systems are not functioning as intended, people who have been traumatised previously become violent, health systems collapse, competencies are missing. I learned at school that I live in the modern age, in a rich welfare state. Somehow, I have my doubts about that now. Despite digitalisation, artificial intelligence and cyber defence, it seems to me that wars, hunger, environmental destruction, trauma, hatred and hardship are not decreasing, it rather seems to me they are increasing. Or does it only seem that way? I hope we’ll succeed at learning to overcome trauma and crises, building resilience and learning from mistakes. If we can succeed, we can reduce crises and traumas over time instead of allowing the media to shower us with ever new crises and traumas. On this note, watch less crime stories and let’s personally get involved in looking after our own needs, our security and safety, our fellow human beings. We cannot always assume that others will do it and are any good at it. 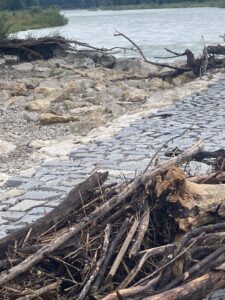