Many people experience Christmas as very romantic. They are looking forward to the festivities, the good food, being with others. At the same time, Christmas also shows how different we are and how difficult it is to cosily be together.

What was different back then: We find a man and a woman and a child in a manger. That alone would be reason enough today to start me too debates and discussions about gender and educational principles. The man in the stable would have dreamt that he would need to stay with the woman even though the child was not his. The woman believes to be a virgin and giving birth to a child of God. What would today’s people say to those ideas. Then the poor shepherds go into the stable, they want to help. No firewall, no data protection, no report to the police for trespassing or social distancing measures. And the animals and people together in this stable, imagine the lack of hygiene, no public health department representatives pay a visit, no police, no disinfectants. And on top of that, the thee wise men pop in with presents. That would be roughly equivalent today to billionaires without passports crossing the border, entering refugee camps and visiting sceptical boat people to bring them presents. To make matters worse, one of them is black. All that without debates about racism and police surveillance.

Taking all of this into consideration, it is really a miracle that the star of Bethlehem wasn’t a drone, the shepherds weren’t terrorists, people survived without vaccinations and neither border controls, nor libel action or police operations were necessary to control the situation. Everything went peacefully and healthily despite all the different people, despite the different countries of origin, despite unrealistic ideas, despite poverty and wealth, without passports, military operations and hygiene regulations. And God seems to approve, at least that’s how the story goes, he sent his angels who were even allowed to sing to express their joy in the small stable. Maybe Christmas really is holy and romantic and we have good reason to still celebrate this extraordinarily peaceful story today.

I am wishing you a peaceful Christmas! 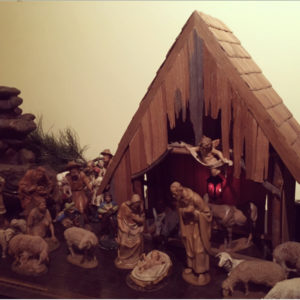